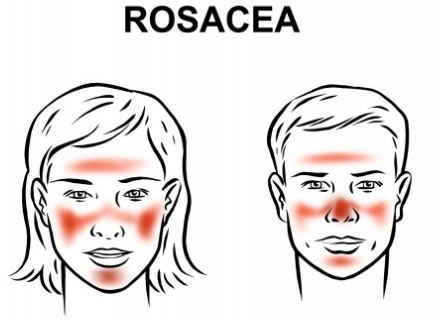 Red face conditions are often confused with Rosacea. Rosacea is a chronic inflammatory disorder affecting the face. It is prevalent amongst fair-skinned individuals, especially of Celtic and northern European origin and is more common in women.  The characteristic skin lesions (redness, visible blood vessels, papules, and pustules) appear in the middle of the face (forehead, nose, cheeks) between the ages of 20 and 50. Flushing due to spicy food, alcohol, weather changes, sun, hot showers, etc often have a negative impact on a patients social life. Stinging, burning, sensitivity of the skin and intolerance to cosmetics are also very common and in some cases the eyes can become, red, itchy and dry.

Red face / Rosacea is a common skin disorder that often begins as redness in the cheeks, nose, chin and forehead. Many patients find that this redness can be triggered by external factors such as temperature changes or certain foods and drinks. It can also be triggered by stress and is sometimes mistaken for blushing. Both men and women get rosacea. Women may be more likely to experience rosacea, however men are more likely to have more sever forms of the disease.

People with rosacea often find that this redness appears and disappears at the beginning, but over time certain areas of the face may stay red. These areas sometimes have visible blood vessels or tiny pimples that may look similar to acne. As with acne, there are some microorganisms that seem to play a role in symptoms. However, it is important to realize that rosacea is not “infectious”, and cannot be transmitted from one person to another. Some people also find their skin to be more sensitive to irritation and can experience burning or itching sensations. (Powell 2005)

There is no specific test for rosacea. A dermatologist or other health care provider will usually make a diagnosis by examining the affected skin. However, your doctor may ask several questions that may help ensure a proper diagnosis or to rule out other skin disorders. There include questions about: (Powell 2005).

The effects of rosacea go beyond skin problems- there is an emotional side to the disease as well. Surveys have shown these emotional consequences often weight heavily on people with rosacea. In a survey performed by the National Rosacea Society that include over 500 people with rosacea, 42% reported feeling sad or depressed by the appearance of their skin. In this survey, rosacea was second only to weight gain as the top age-related concern- making it a greater source of anxiety than many other common concerns, such as wrinkles, thinning hair and cellulite. (National Rosacea Society)

The exact cause of rosacea is not known, but researchers think that both genetic and environmental factors play a role. Almost one third of people with rosacea have a family history of the disease, which suggests that genetics are important in this disease. People with Rosacea also find that there are several environmental factors that “trigger” their rosacea. You may notice that some of these factors in your daily life trigger your rosacea symptoms such as facial flushing. Triggers can be very different from one person to the next, and it is important for you to keep on track of your triggers to help you avoid them and minimise flare-ups.

Factors that may trigger rosacea include: (National Rosacea Society)

Data based on an unscientific survey by the National Rosacea Society of 1066 patients with rosacea.

There are also known risk factors for rosacea. While anyone can develop rosacea, these factors can alter your risk showing symptoms:

Family History: 30% of patients with rosacea have a family history of the disease. This means that if rosacea runs in your family, you`re more likely to have it yourself. (Powell 2005)

Light complexion: People with fair or light skin, especially those of Celtic or Northern European ancestry, are at greater risk. (Powell 2005)

Age: People between the ages of 20-60 are more likely to develop rosacea, especially women of this age going through menopause. (Mayo Clinic)

Flushing: People that experience frequent flushing or blushing are more likely to be diagnosed with rosacea. (Mayo Clinic).